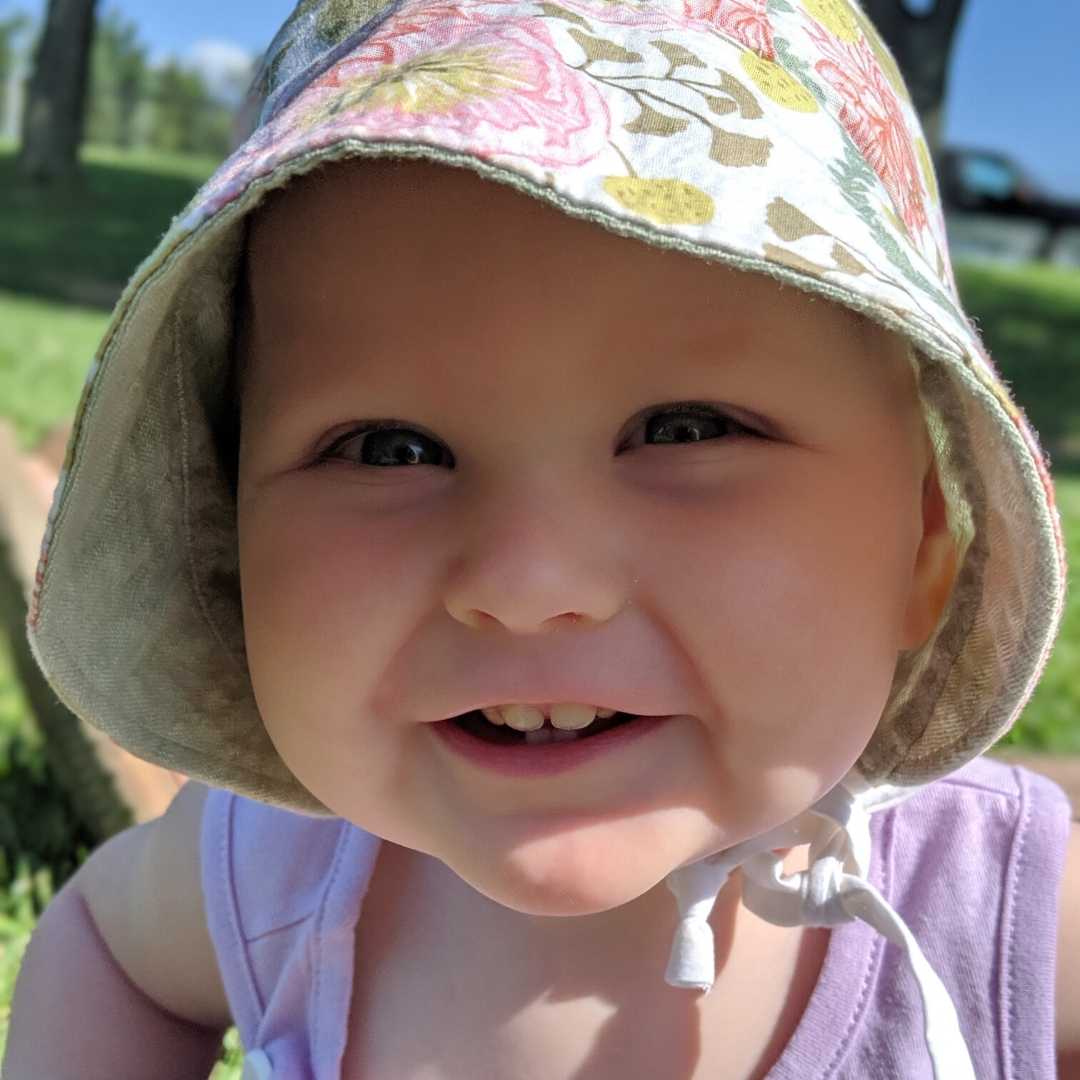 On August 15, 2018, our family welcomed Maeve to the world. I was induced at just over 41 weeks. It was an uncomplicated pregnancy and a smooth labour that had our sweet daughter in our arms just a few hours after being induced. As part of the normal newborn screening program in Ontario, Maeve had her hearing screening the morning after she was born. Our province provides universal newborn hearing screening to detect newborn babies with any potential permanent hearing loss at birth. Maeve received a pass on her left ear, and after a few tries, a “refer” result on her right side (meaning to be referred for more investigation). The test was done a little before the 24-hour mark in Maeve’s life, so we weren’t overly concerned and were told that it is fairly common due to fluid in the ear at young ages. We were soon discharged from the hospital and on our way home with a follow-up appointment to re-asses Maeve’s hearing in 1 month.

At the follow up hearing screening, we received another refer result and were referred to an audiologist for further investigation. We were asked if we consented to having Maeve’s newborn bloodwork tested for something called congenital CMV (cCMV). In Ontario, all babies have a heel prick done at birth to test for the most common asymptotic but serious diseases and with a failed hearing screening result, they can go back and test that newborn blood work for cCMV. CMV was something that I was somewhat familiar with, but not in the context of congenital CMV in a newborn baby. Working as an ICU nurse in a large hospital, immunocompromised patients were sick with CMV infections often. Even being a nurse, I still hadn’t been aware of the possibility of congenital CMV and the implications it could have in a developing fetus in utero. Throughout my pregnancy, cCMV prevention and education wasn’t something provided. I was careful with all the usual risks in pregnancy, but cCMV was never on my radar of possible outcomes.

A week later, our world was flipped upside down when a call from a councillor confirmed that Maeve did screen positive for cCMV and we would need to have follow up appointments for the next steps. We were left with a lot of fears and a never-ending list of questions. What does this mean for Maeve? Will she be okay? Is everything we read on Google true? What comes next? What should we expect? Fortunately, we received great support from our health team and were scheduled for a full hearing test within a day. The audiologist appointment was set and we were going to meet with the infectious disease team at our local children’s hospital just a few days later.

After a sleeping hearing study (ABR), we immediately found out that Maeve had profound hearing loss on her right side and was unilaterally deaf caused by CMV. cCMV is the leading cause of non-hereditary hearing loss in babies. The hearing loss can be progressive and worsen into adolescence. After our appointment with infectious disease specialists, we were provided information on an anti-viral treatment option for cCMV. If treatment is started immediately, there is research to support the anti-viral medication can prevent the further progression of hearing loss. Ultimately, with the infectious disease team, we decided to treat Maeve with the medication to attempt to prevent any further hearing loss, and she completed a 5-month course of treatment without complication.

In August 2019, Maeve received a cochlear implant on her affected side through a research study on unilateral hearing loss, which gives her the gift of bilateral sound. In terms of other effects of the cCMV, it seems to be a wait and see approach. Although most of the other diagnostic tests were negative, Maeve has some gross motor delay that could likely be caused by cCMV. With regular physiotherapy and speech language therapy, Maeve is a normal, busy, determined toddler. Fast forward a little over a year and a half, and our Maeve is doing amazing. We continue to have hearing tests every few months to monitor her left ear for progression of hearing loss, but so far, her hearing remains normal.

We are very thankful for the early intervention in this process. Just months before Maeve was born, Ontario introduced the enhanced screening process, so that when Maeve received her failed hearing screening, that bloodwork was automatically screened for CMV. This led us to get the ‘ball rolling’ so to speak and led us to quickly start receiving anti-viral treatment, which is crucial in the prevention of further hearing loss. Prior to Ontario’s enhanced screening process, it could have taken months for Maeve to get to the right health care providers and possibly putting her outside of the medication treatment window.

Unfortunately, Ontario is one of the only provinces to take this enhanced screening approach leaving many other children with missed and delayed diagnosis. Education, awareness and early detection is so important in the battle with cCMV and there is a lot more work to be done!