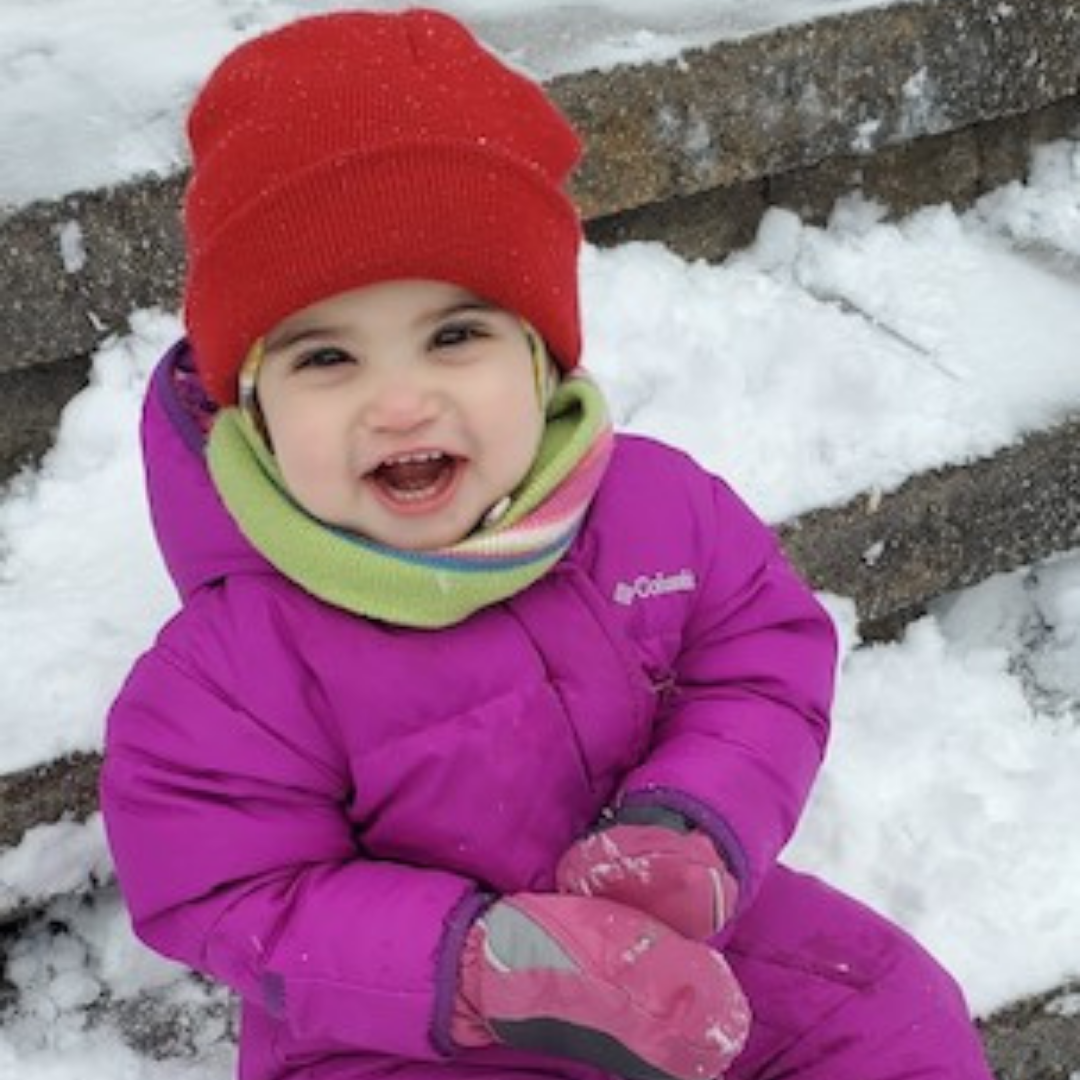 Hazel, our second daughter, was born August 15th, 2019. We felt so fortunate. The delivery was smooth and there were no complications during the entire pregnancy.

A week after Hazel was home, we went for her hearing test at a local church. She got a ‘refer’ on both ears after multiple attempts. This didn’t worry me much because my first daughter hadn’t passed on one ear the first time she did the test, and then she proceeded to pass the second time. They told me it was probably just fluid in the ears.

I spent the week in-between visits watching Hazel, studying her reactions to sound – there were none. She didn’t startle when my dogs barked, or if I clapped beside her. I began to worry.

Hazel and I went back a week later for her second test and again she received ‘refer’ on both ears. Now I was really worried.

I was told we would be referred to the Children’s Hospital of Eastern Ontario’s Audiology Unit for a hearing test. We expected CHEO to call and book the appointment. Instead, a few days later, I got a call from CHEO’s Infectious Disease Unit. They had Hazel’s test results. She tested positive for Cytomegalovirus (CMV) and would need to come in for further tests.

Now I was worried and confused. When was she tested? What was this virus? They had to remind me that she had a heel blood swab at the hospital. The swab was testing for a few different things and one of them was CMV. As a tired mom of a newborn and a toddler it took me a minute to remember everything, then it came to me: hospital appointment, heel swab and someone saying after the heel prick, “if you don’t hear from anyone, no news is good news!” – but here I was getting “news.”

The silver lining in all of this is that Ontario is the first province and jurisdiction in the world to have a CMV screening program at birth. I remember my first daughter getting the same test but, if I’m being honest, I had no idea what they were screening for with either baby.

Her hearing test showed that she had bilateral hearing loss. We met with more specialists. The Infectious Disease team met with us that very day. Hazel had a brain ultrasound that identified some calcification of the brain, which could mean potential developmental delays or other concerns, but we wouldn’t know until she got older. They started her on a six-month treatment of anti-viral medications right away to combat the virus worsening in her tiny body.

We learned a lot that day. CMV is the leading cause of non-genetic sensorineural hearing loss and the second leading cause of intellectual disability after Down syndrome. Most people who are carriers of CMV have no idea. It passes through fluid – tears, saliva, and urine. They asked if we had any other children, and we told them about our eldest daughter – she was almost 3 and in daycare. I could have contracted CMV anywhere, but it is very common to see it transmitted through young children, as they usually don’t have symptoms – and let’s face it, they leave fluids everywhere. A random door handle, wiping away my daughter’s tears, playing with other children at daycare, kissing, sharing a cup – I had no idea where I contracted the virus. If I wasn’t pregnant and I contracted CMV, it likely wouldn’t have caused me any harm, but for some reason, if you contract the virus while pregnant it can have profound effects on your unborn child.

It was a long, tearful drive home. It’s hard to be a mother. It’s even harder when you find out that you had a virus, passed it on to your baby, and now they will live with the effects forever. Moms can also be really hard on themselves. Logically, I knew this was not my fault, but it still weighed heavy on my heart.

After that visit, Hazel went through a series of tests. They determined she would be eligible for bilateral cochlear implants.  Her surgery was scheduled in May of 2020 during Ontario’s COVID-19 lockdown. Like it did for everyone, COVID-19 added its own set of complications to our situation – no need to detail them here.

Surgery was tough, but the team at CHEO was amazing. Hazel was a champ. Her activation date was exciting. She didn’t react very much, but it was still a thrill to think she could hear – hear my voice, hear her name, hear her sister and dad and the dogs.

Hazel is 19 months old now and thriving. She says over 30 words, runs, laughs, and is pure sunlight in our lives. So far, other than her hearing loss, no other symptoms of CMV have presented themselves.

This pandemic and all its restrictions have left us with extra time on our hands. I sometimes catch myself thinking about all the questions the doctors asked me during this process. The one that stands out is, “had I ever heard of CMV before this?” 19 months ago my answer was a simple, “no.” But I’ve spent a lot of time reading up on it since.

I now know that 1 in 200 Canadian infants are infected with CMV during pregnancy. That seems like a lot.

Yet, I had never heard of it, and neither had any of my friends. After I found out about Hazel’s diagnosis, I was suddenly very aware of the many prevention tactics for CMV and made sure those around me knew.

Sound familiar? It should!

Prevention tactics for CMV are very similar to the ones recommended to stop the spread of COVID-19. The biggest difference is that COVID-19 health promotion was so widespread – and we were paying close attention. It leaves me to wonder, couldn’t more be done to bring awareness and attention to CMV? Most people still don’t know about it – most pregnant women have no idea. They say hindsight is 20/20, but I think I would have behaved differently or been more mindful had I known more about CMV and its effects for myself and my unborn baby – the very same way I am for COVID-19.

But prevention isn’t the only thing that needs to change. As I mentioned, Ontario was the first province in Canada to introduce a universal CMV screening program at birth. It shocks me that this isn’t available in every province in Canada. I hope to see that change in my lifetime. I believe bringing awareness to CMV is a first step. Sharing our story is my first step.

We continue to be grateful to the staff at CHEO for their support.