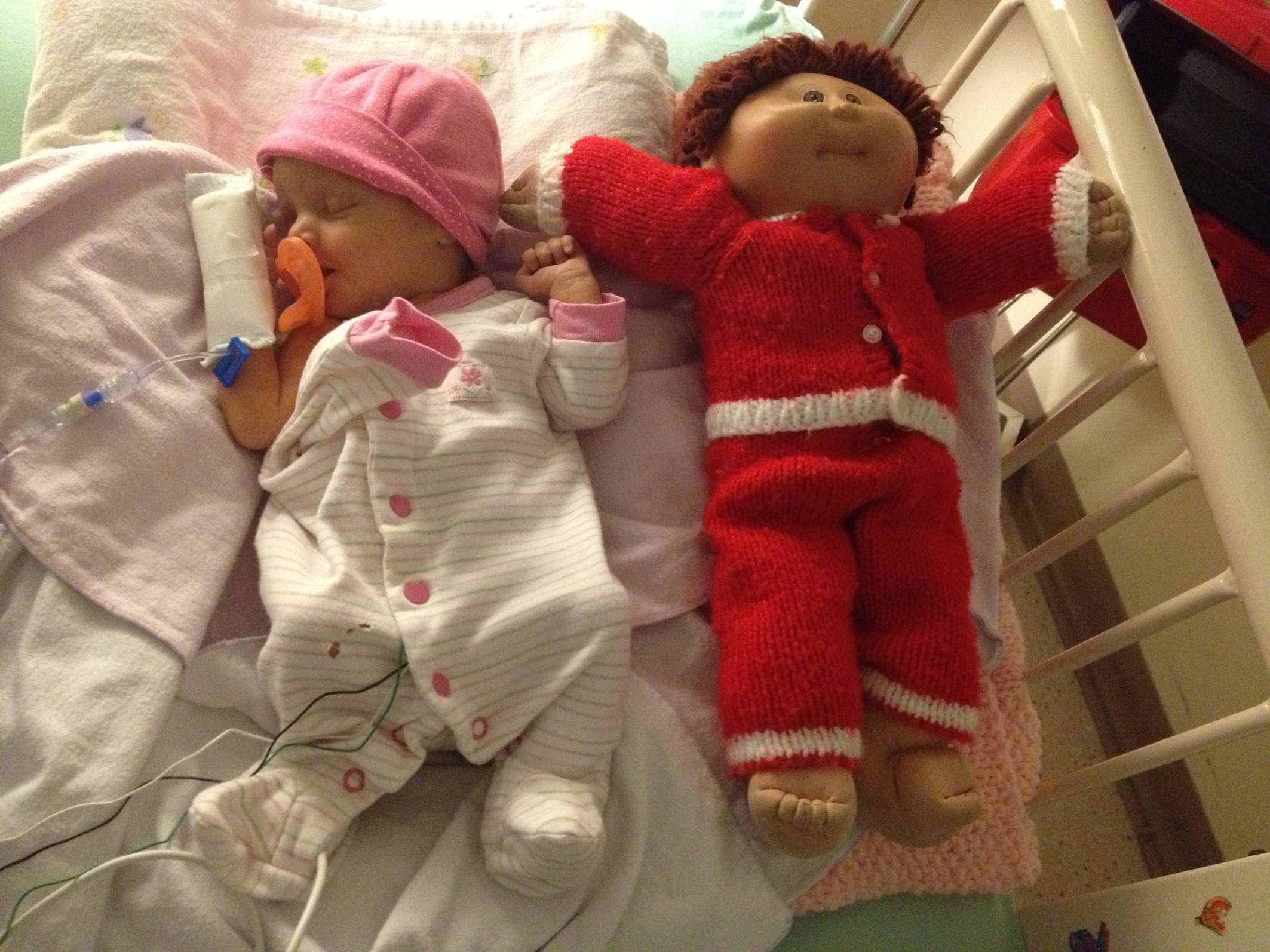 After a mostly uneventful pregnancy, Grace came rushing into the world in the middle of the night in late November, 2012 at 38.5 weeks. She was tiny, but she had this full head of black hair which surprised us all!

The “mostly” uneventful pregnancy included one hiccup – at Grace’s 20-week scan, she had a slightly enlarged kidney and an echogenic bowel. The OB said these were not things to worry about, and an ultrasound would be performed on Grace once she was born to make sure the issues had rectified themselves. Little did I know that this was the first sign that Grace was infected with CMV.

When Grace was born, she was full term, yet only 5lbs. The doctor estimates that she stopped developing in the womb 2-3 weeks prior to her birth. She couldn’t regulate her body temperature, she was very jaundiced almost immediately, had low muscle tone, low platelet count and wasn’t sucking well. Grace was transferred to Toronto’s Sick Kids Hospital, where she spent 3 weeks in the NICU; this is where CMV was discovered as the culprit. We were told that CMV can cause all sorts of disabilities in children and we would have to see what would emerge as she developed. I’m not very good at “wait and see” because I’m a planner by nature, so I’ve really learned some lessons in patience and strength. Grace was started on ganciclovir through IV and transitioned to Valganciclovir, which she took until she was 12 months old. She had to come off the meds twice due to her blood count being affected.

Grace was generally a happy baby. She continued to be small for her age, weighing 16lbs and wearing 3-6 months size clothing at her first birthday. I remember making a comment one time at a kid’s store, “why would they make a shirt with a 1st birthday design in a 3-6 month size?!”, and then I later found out why!

Grace’s first few years of life included many therapies, including Physical Therapy, Occupational Therapy, Auditory-Verbal Therapy, and many, many doctors’ appointments! Grace held her head up independently by age 6 months, could pull to stand by age 1, and could walk unassisted just before her second birthday. Grace passed her 3-month hearing scan, so we thought we were in the clear. However, at 8 months, her hearing had deteriorated to “severe” in both ears. This was a huge shock for us, and to this day we don’t know if she lost her hearing due to the virus reactivating during her breaks from the antiviral, or if the audio toxic antiviral caused the hearing loss. It doesn’t really matter which, as we don’t regret the treatment.

At age 16 months, Grace received cochlear implants in both ears. We had no idea how difficult this journey would be! From the surgeries to the daily struggle of trying to get and keep the processors on her head… I sewed so many different little bonnets and headbands during the first year!

Today, Grace is 7 years old and has a little brother named Nathan who is 5. Developmentally (cognitive and emotional mainly), she is approximately a year behind the other kids her age, but she progresses steadily – she’s feisty and determined, and we are so proud of her! Nobody usually knows anything is different about her other than that she wears hearing aids.

Grace loves to swim, play soccer, sing (though I’m not sure if she’s tone-deaf from the hearing loss or because she inherited some of our family’s singing skills!), and do pretty much anything creative. She loves doing people’s hair and makeup and wants to be a hairdresser when she grows up. I’m pretty sure she’s better at doing makeup than I am!

Grace continues to be monitored by the Infections Disease clinic at Sick Kids, as well as a local developmental paediatrician. Her Grade 1 year of school was especially difficult for her, and that led to some extreme behaviours and questions of ADHD. She continues to be monitored, and her Grade 2 year has been like night and day; she’s been so much happier, calmer and less frustrated.

Thank you to CMV Canada for your commitment to ending CMV!