By Kayla KeenanJanuary 25, 2022No Comments

We headed in for a regular ultrasound at about 19 weeks of pregnancy, excited to be expecting our second child. The ultrasound revealed an anomaly on our baby’s bowel – it looked too bright compared to the adjacent bone. Finding this echogenic bowel – a calcium deposit – prompted a follow-up amniocentesis. At 23 weeks of pregnancy, we learned that our baby had a severe Cytomegalovirus infection and might not even survive the pregnancy.

Our situation was unique. Knowing about the infection before birth allowed us to draw on extra resources and treatment almost right away. Most families don’t know their baby has CMV until they are born. And, due to very little parent education and information on this congenital viral condition, some have children with developmental delays or deafness – but never know the cause.

Prenatal ultrasounds showed Georgia had an enlarged liver, spleen and heart, and had calcification in her brain. She had become anemic from the virus in utero, and was covered in a “blueberry rash” at birth. I received hyper-immunoglobulin treatments – compiled immunity from blood donors originally designed for transplant patients receiving an organ from a CMV-positive donor. Knowing there was weak scientific evidence showing this highly controversial treatment would be effective, I had a series of four-to-five-hour blood transfusions – thankful to have this option that might help our baby.

Georgia was welcomed into the world in January 2012. With a severe case of congenital CMV, we were told to expect the worst. The conditions of babies with CMV are unpredictable – ranging from symptom-free for life to infant mortality.

After Georgia was born, she spent time in the neonatal unit, receiving antiviral medication and oxygen. At two days old, her MRI revealed her brain was underdeveloped. She was diagnosed with polymicrogyria – disorganized neuron development with too many folds. Her folds were smaller, unable to process information like a normal brain.

Surprisingly, Georgia nursed well. We had mixed reactions to this good news. We were afraid to be relieved, afraid to hope that our baby’s condition was better than we were told to expect.

Over time, the impact of Georgia’s condition – while still far better than anticipated – would reveal itself. Learning to chew and swallow took time. She was diagnosed with cerebral palsy, and gross motor delays kept her from walking until she was two-and-a half years old.

Knowing Georgia was living with CMV enabled us to get her early interventions – physical, occupational, and speech and language therapy and educational psychology. Georgia goes for regular Botox treatments to treat the muscles in her cerebral-palsy-impacted limbs.

For our family, there is a lot of extra work associated with having a child with extra needs. We spend extra time on eating and dressing – everything takes longer. Her older brother is sweet. He watches out for her on the playground at school, because Georgia’s safety awareness is low. We all have to manage fatigue and burnout, make time for extra appointments, cover extra costs and juggle work schedules so we can spend time in the morning getting Georgia ready for school.

Georgia is now ten. We are very fortunate. Georgia has normal hearing in one ear, only mildly delayed expressive speech and language and is physically healthy. It’s the neurological differences that create challenges. Her dad describes Georgia as a full-time job for one person. Her language processing delays require repetition of new instructions and information.

A happy, positive part of her class, Georgia has a full-time educational assistant, endears herself to her classmates and enjoys having friends over. We love her strong, unique character and can’t imagine her any other way.

That said, we wouldn’t wish CMV on anyone. Our family is actively involved in raising awareness of the condition. Right now, very few people know about it and healthcare professionals don’t actively talk about it.

Strange, given that CMV causes more birth defects than Down syndrome.

Had we known about CMV and that I was in a high-risk category during my pregnancy – with a toddler at home and working with children as a speech and language pathologist – I could have been preventative.

But, since treatment for congenital CMV is complicated, and doctors don’t always agree on what is most effective, most provinces don’t screen pregnant mothers or newborn babies. Ontario was the first, and remains the only province to do universal screening for CMV.

We are hoping for a shift – where doctors realize public awareness is important and we screen and watch babies more closely. At least then, babies born with serious CMV infections can receive oral antiviral medication to prevent further damage from CMV, be monitored for the effects of the virus, and receive early intervention and tests for later-onset hearing loss.

That’s the best we can do, until we have a vaccine for CMV. 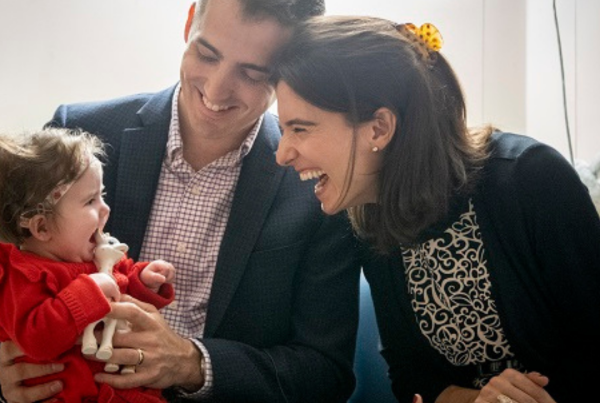 Our CMV Story – The Jones Family