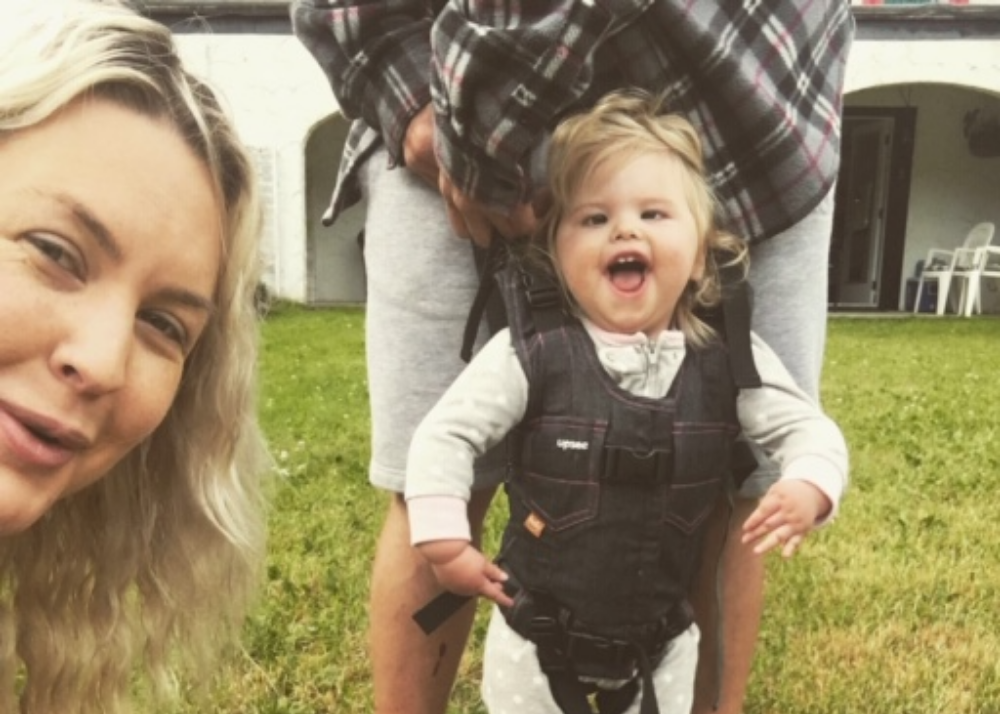 We found out that we were expecting a baby in January of 2016. Our due date was for September 2016. We were so excited!

My pregnancy was going very well. I was hungry. Tired. Grumpy. But embracing my cute baby bump.

On April 18, we went for our 20-week anatomy scan. To be honest, I wasn’t even concerned about not having a healthy baby. Everyone around me always had healthy babies. During the ultrasound, they found something and said they would have our doctor contact us as soon as possible. A few days later, my doctor told us that they observed bright spots on the baby’s bowel (known as echogenic bowel). They said it was common for errors during ultrasounds but did recommend a more in-depth ultrasound with a specialist. The following week, I got in to see the specialist. During the ultrasound, they confirmed the echogenic bowel, but we still thought everything was fine. Two weeks later, another ultrasound and blood work. My blood work results came in and my antibodies showed a recent infection of CMV.

What is CMV? was my first question. Where did I get this? And is my baby going to be okay?

During our June appointments they noticed our baby’s head measuring 6 weeks behind. They were asking questions… Do any family members have a smaller head size? On June 17 I went for a routine ultrasound to check on the head growth. Unfortunately, it was actually starting to grow even slower. Great. They immediately took me upstairs for a fetal MRI. We were told that our baby was likely infected with cCMV and they would contact me with the results in a few days. It felt like forever, even though she ended up phoning us the same day. She explained that our baby’s ventricles in the brain were measuring “off” and that is a marker for CMV.

From that point on I was followed even closer. Our due date was scheduled for September 22, 2016. I was worried but trying to stay positive. Googling hurt, but nobody else had answers for me. I was getting nervous about the delivery coming up.

On August 31, I had my weekly ultrasound. The doctor came in during the ultrasound and said your baby has an enlarged spleen you need to go upstairs right now and get induced at 37 weeks. What?! I thought I was going to pass out, literally. He said she needed to come out now to begin treatment or she might not survive. I didn’t go upstairs. I got in my car and drove home and called Kyle. We phoned the doctor and said we would arrive at the hospital at 6:00 am the following day to start induction. Labour was great. I actually can say that in confidence. Giving birth to our beautiful daughter, Ava Lynn D. was amazing! 5 lbs 4 oz of pure perfection. We had a room full of infectious disease doctors assessing her when she was born. Her app score was 9. The delivery doctor looked at me and said… Well you’ve been a victim of ultrasound (with a huge smile on his face)!

I remember when they put Ava on my chest, I felt so disconnected. I felt like something was wrong. I wanted to believe what all these doctors were saying – that she was healthy! But her head was so tiny. It was the size of a baseball. I just knew something was not right. They kept us overnight and sent us home the next day. Ava was making strange sounds while feeding and the doctors assured me it was just positioning. They did want a urine sample to confirm if she contracted CMV, but assured us they did not think she had it. Looking back, I can’t believe we got sent home.

The following Monday, our paediatrician contacted us and confirmed our sweet little girl was infected with CMV during pregnancy. We rushed to the paediatrician for more details and to discuss our options. They let us know about an antiviral medication – Valganciclovir. The risks. The side effects. All that. We started treatment at 4 days old, for a duration of 6 months.

On day 7, Ava Lynn started turning blue at home. We rushed her to the Stollery Children’s Hospital. The health care staff there were in complete shock that we were sent home from the hospital where we delivered. They performed a bunch of tests and told us she was actually 35 weeks at birth, CMV positive and had an enlarged spleen! We didn’t know that night if our baby would make it. She was so sick.

Since birth, we had been flooding her lungs and throat with breast milk due to feeding her with a regular flow nipple. We spent 4 long weeks together in the NICU. We learned more about CMV and microcephaly. Ava had an MRI and confirmed there was quite a bit of brain damage. It was heavy. It hurt and it was hard to swallow.

We fell through the cracks. My entire pregnancy was considered high risk. Our doctors knew our baby was potentially infected with CMV, but they sent us home the following day after birth knowing her head was small, knowing she had strider, knowing her spleen was enlarged and so much more.

Today, our sweet girl is doing very well. We love her in circles, and she is always full of smiles. We love her. We have an amazing team of therapists and resources now that have helped Ava get to where she is and will help us get to where she wants to be. We have since been diagnosed with spastic quad CP, bilateral hearing loss, developmental delay and a few others.

CMV has changed our life. We want people to know what CMV is, what CMV can do and how you can prevent CMV infection. Speak up.